Now before I waste your time, I was fully dressed. (I’m sure you’re relieved.)

What I didn’t bring on my run was my fanny pack high-tech water delivery system, which also meant I had no tissues to wipe my brow, ChapStick for my lips, candy SportBeans to give me energy, Body Glide for my legs, water to hydrate me or a spot to hold my phone.

I also wore my Asics Abby running skirt, which meant pulling down the compression shorts underneath every half mile or so.

Woe is me, right?

Which all made me think that perhaps I should rename the blog again. Masochist Runner anyone?

I did have my iPhone so I could both listen to some Juan Luis Guerra and log my miles on my Nike+ app. (I’m a masochist, not an idiot.) Slipped the phone in my skirt which is incredibly hot and uncomfortable.

So why the miserable conditions?

My first half is in a couple more weeks and I wanted to put myself in an uncomfortable situation in case everything doesn’t go as planned. There’s an unwritten rule for running that says that you shouldn’t ever try something new on race day. No new food. No new clothes and for the love of all that is holy, no new running shoes.

I’m adding a slight twist to that rule: thou shall plan to be uncomfortable on race day.

No matter how well you plan, something won’t be quite as you expect. I’m looking at you, last trail run filled with mosquitoes!

I was by no means suffering today, mind you. And it was “only” four miles. But it feels good to know that I’m not going to die if I don’t have every single creature comfort they sell at our local running store. (Though I do love me some Playmakers!)

One of my long-term goals for the half has also been to find a comfortable outfit. Something that doesn’t chafe, that doesn’t make me hot and that doesn’t, ahem, give me a wedgie.

Running shorts have been just OK so far. Target carries some Champion shorts that aren’t too bad, but they poof up and aren’t flattering. Reminds me of parachute pants. The Nike shorts ride up. The aforementioned running skirt’s compression shorts do, too.

So, I’m trying some capri compression shorts with a tech T-shirt. I’ll let y’all know how that works out.

In the meantime, I’ll be wearing my fuel belt on my 10-mile run tomorrow. Because… 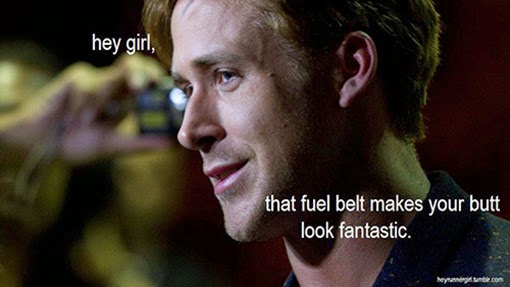 Are you training for a race? Are you trying out new clothes or shoes? What are you using for fuel?

Keep up the good work! This sounds like me a year ago when I was training for my first 1/2. I’m now training for my 3rd in November, and have a few more of those unknowns worked out. For starters, if you want a great skirt with built-in compression shorts that don’t ride up, visit skirtsports.com and purchase the GymGirl Ultras. i LOVE mine-have two pair and am buying a 3rd. Each leg has a little pocket that holds your phone (I have iPhone 5s with otterbox case) or beans/Gu/tissue, key, etc. Also has a little port to run your headphones through. The skirts run around $45-65 depending on color, but so worth it! I also have a SPIbelt that I use when I need to carry a few more things, or I’m running in clothes that don’t have pockets (who building running clothes with no pockets!?). Good Luck on your race!

Thanks, MiniJ for both your encouragement and tips. Three half marathons in a year? You’re a beast! That’s awesome.

A running friend represents Skirt Sports and loves their products. Have only hesitated in getting them because I can’t just go return them if they don’t work out. I have issues with getting my butt to the Post Office and packages tend to, ahem, linger until it’s too late. I did try some UnderArmor capris today that I just loved. I will include some info on that when I write my post later today.

Keep up the miles!